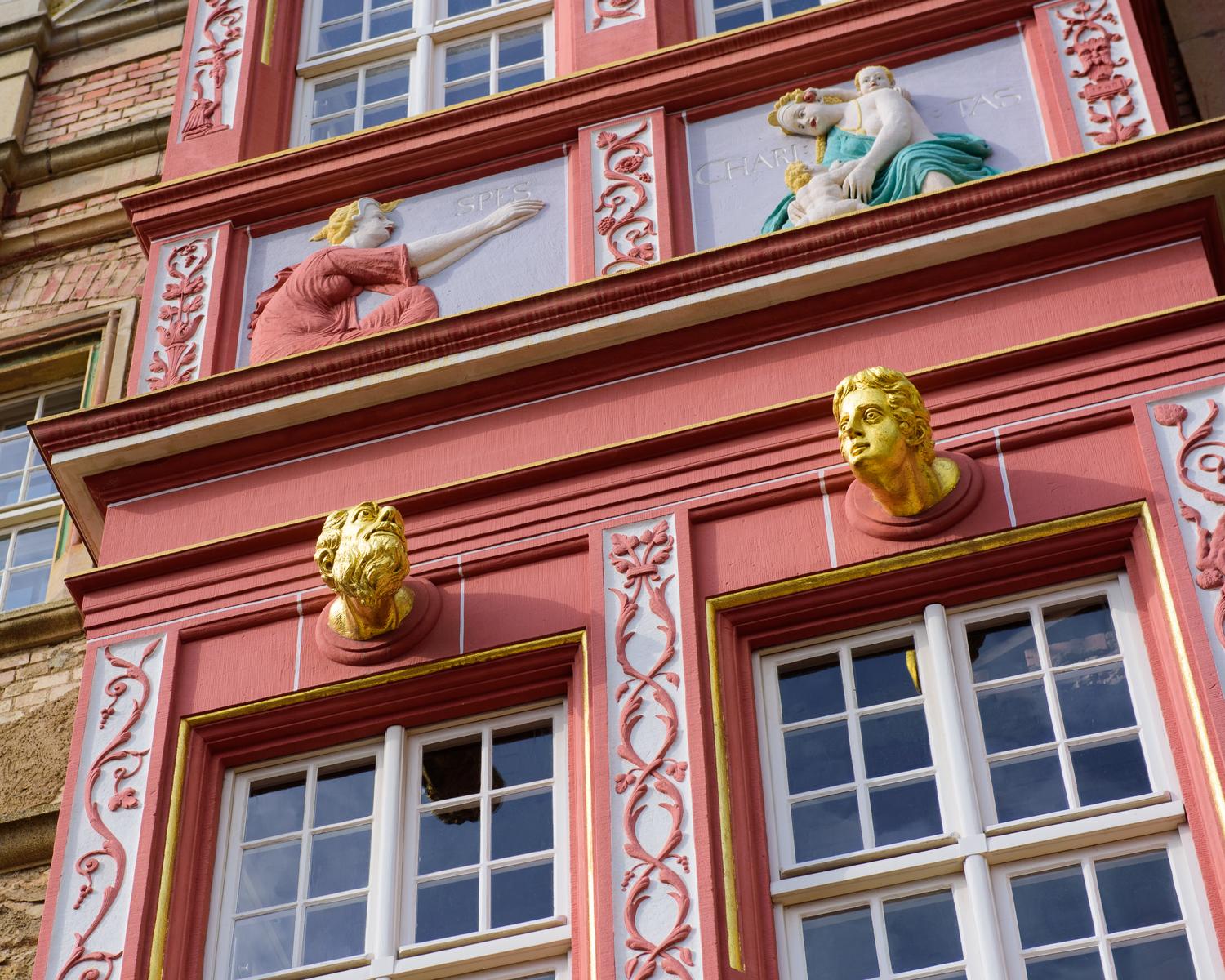 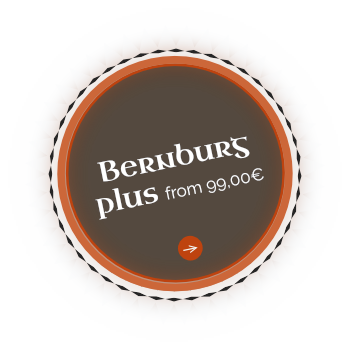 The current Waldau district was first mentioned in 782 and 806 as Waladala in the chronicle of the Moissac Monastery (now in the Bibliothèque Nationale de France in Paris). On July 29, 961 appears in a deed of Emperor Otto I a civitas Brandanburg.

In addition to this castle was probably also on the west bank of the Saale another early medieval fortification, which may have emerged from the in the second half of the 10th century to Gernroder Klosterhof former Frankish royal court "Waladala". In the area of ​​the valley town, a district of Neustadt parish church of St. Nikolai can be assumed to be a city for early trade traders. After the repression of the influence of the Ascanians on the monastery of Nienburg and the important passage there in 1166, the construction of a safe river crossing in Bernburg became more important.

Together with the reconstruction of the castle from the second half of the 12th century, the Bergstädter parish church St. Aegidien was rebuilt. The Aegidien Patrozinium and the elaborate building style of this church as a Romanesque basilica with Vierungsturm indicate that the construction of the Bergstädter parish church was part of a settlement project for Neusiedler from the western parts of the empire, which is now to intensify the Ascanian territorial expansion in the area of ​​Bernburg Castle should settle. At the same time, in front of the castle, in the area of ​​today's Fischergasse, a Slavic Kietz settlement was built. The sale of agricultural products to foreign trade merchants created the basis for the establishment of a Nahmarkt- and service settlement in the area of ​​the Bernburg old town in the Saale valley. This developed then in the first half of the 13th century by the targeted settlement of artisans and merchants and the inclusion of stationary become traders of the Nikolaisiedlung - which was now in a subordinate, but independent Neustadt went - to the Gothic market town on.

The first document for a mill on the Saale comes from the year 1219. The gradient of the Bernburger Saalestufe was well suited for the mill operation. The first bridge was built in 1239. It was destroyed and renewed until the 20th century.

In 1278, the old town and the new town were given the city rights by Bernhard I of Anhalt-Bernburg. 1308, the Bernburg monastery (now St. John's Hospital) was first mentioned, 1326 the mining town. The regional legend brings the place of action of that history, in which Till Eulenspiegel hired as a tower blower with Count von Anhalt, with the keep of the castle Bernburg. However, since there were two keepds at Burg Bernburg in the 15th century and today's "Eulenspiegel Tower" was still called "keulichter thorm" in 1497, it can only be assumed that this transfer took place as a reaction to the reception of the Eulenspiegelstoffes am Bernburger Fürstenhof took place. In 1640, the name "Eulenspiegel" was first used in the Bernburger Salbuch for the round keep of the Kernburg, which is now preserved. Because of the import of duty-free goods by water, it came in 1426 to the "herring war", an armed tariff dispute with the Hanseatic city of Magdeburg. 1526 was the introduction of the Reformation in Anhalt- Bernburg as the third state in the world, after Kursachsen and Anhalt- Köthen. On October 21, 1530, the archdiocese Magdeburg received a privilege of the Catholic Emperor Charles V for free Saaleschifffahrt with simultaneous permission to expand the riverbed. As the first measure for this was begun in the same year with the construction of the weir in Bernburg. In 1559, on the initiative of the favored archbishopric, a contract was signed between Archbishop Sigismund and Prince Wolfgang von Anhalt for the purpose of expanding and securing the Saaleschifffahrt. On this basis, the construction of the first still wooden lock in Bernburg began in 1560. The area downstream of the lock to the Saale bridge has since been called Little Venice, the hillside above this harbor as a "beautiful angle". As early as 1605, levies had to be levied to maintain the locks because of the decline of the Saaleschifffahrt.

In the witch hunts at least 46 persons were accused 1555-1664 in city and office Bernburg. The witch trial became known 1617-1619 against the wife of the mayor Meyhen, Barbara Meyhe. On 9 December 2015, the unveiling of a memorial plaque for the victims of the witch hunt in Bernburg (Saale) took place at the former rectory of the Church of St. Mary, Altstädter Kirchhof 10.

In 1595 a flood destroyed 160 houses in the valley town. 1603 Bernburg residence and garrison town of the Principality (from 1807 Duchy) Anhalt-Bernburg. In the Thirty Years War, the "Holk riders" conquered and looted the city in 1630, a plague epidemic demanded at that time1700 victims. 1666 raged a conflagration in the old town. The last plague epidemic visited Bernburg in 1682. 1697 the first stone Saale lock was inaugurated. In 1745 the first steam engine for mining was constructed in Bernburg. 1757 and again from 1807 to 1813 Bernburg was under French occupation. Valley and mountain town were united in 1825 to the city of Bernburg. The Anhalt-Köthen-Bernburg Railway opened in 1846 Köthens third station and thus Bernburgs first rail connection to the stations of the Magdeburg-Köthen-Halle-Leipzig Railway Company (1840) and the Berlin-Anhalt Railway (1841). In 1860 a castle Bärenzwinger built to hold the first 1858 arrived from Russia brown bears. The kennel was renewed in 1996 according to animal welfare principles. In 1863, the Duchy of Anhalt-Bernburg ended with the death of the last Duke Alexander Carl. In 1890, the Solvay works were opened, making Bernburg for a short time the largest city in Anhalt. In 1891, the first steel bridge over the Saale was built. In 1895 the district of Bernburg had a new hospital built in pavilion style by Gropius & Schmieden. In 1902 the town became a salt water bath and got a spa. In 1913, the Keßlerturm was inaugurated, named after its founder, Kommerzienrat Theodor Keßler (1839-1917), a partner of the Bernburger Zinngießerei L. Keßler & Sohn. In 1933, the city of Bernburg became kreisfrei.1934, the new market bridge was inaugurated. During the period of National Socialism Bernburg was again from 1935 garrison city and housed parts of an infantry regiment and a variety of replacement and Luftwaffen-Einheiten.Im in the wake of the upgrade of the Wehrmacht north of Strenzfeld the "plant Bernburg" of Dessau Junkers aircraft factory was built where Ju 88 were assembled and taken over by the Luftwaffe at the adjoining airfield. In World War II, the plant was bombed several times.In November 1940, the National Socialist regime Bernburg (now State Hospital for Psychiatry and Neurology) was established and operated by the National Socialist regime in the then State Healing and Nursing Institute Bernburg. Between 1940 and 1943 over 14,000 people were gassed there as part of the euthanasia programs "Aktion T4" and "Aktion 14f13". The Bernburg Memorial, newly opened in 1989 for the victims of Nazi euthanasia, is located in the authentic place of the former health and nursing home or the present state hospital. History of the house Well before the 19th century, the house was run as a Hotel zum goldenen Löwen. This epoch went back to the 1960s. In the aftermath, it housed flats and fell into disrepair in times of DDD. Since 1992 it has been used as a hotel again. The Höfinghoff family invested a lot of energy, time and money in the refurbishment and an extension in the rear building 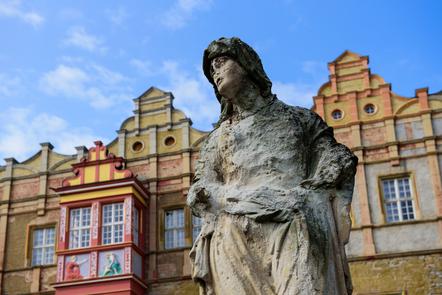 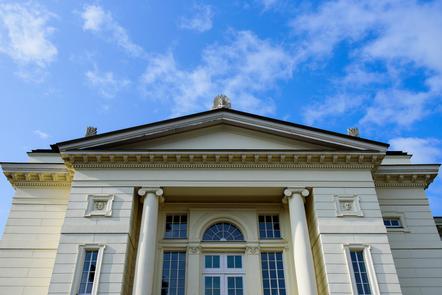 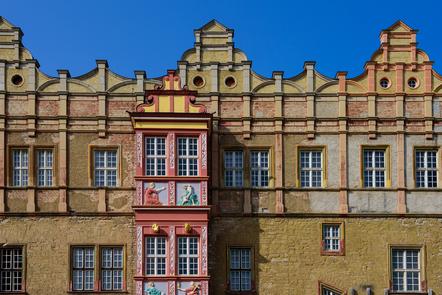 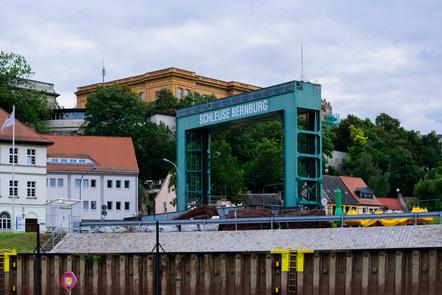 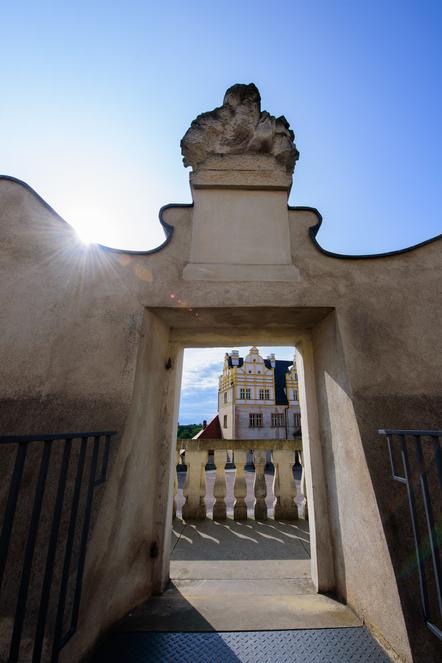 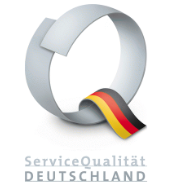